We will legalize marriage certificates of Unlicensed Worship Centers — FG

By Nicerythm.com - August 02, 2019
The Federal Government has said it is working to amend the Marriage Act.
The Permanent Secretary, Ministry of the Interior, Georgina Ehuriah, said in Lagos on Thursday that the amendment became necessary in order for the ministry to "adequately meet the needs of citizens in the 21st century."
Ehuriah said this while delivering the keynote address at a stakeholder conference with the theme, "Achieving harmonious compliance in the conduct of statutory marriage in Nigeria."
In the legal fight over who has the statutory power to perform and issue marriage certificates, the Ministry of Interior and local government areas had been locked up.
Ehuriah said on Thursday that only the Principal Registrar of Marriages was authorized to print and distribute marriage certificates to places of worship throughout Nigeria by the provisions of Sections 24, 30(3) and 30 of the Marriage Act. "The implication is that any certificate not printed and delivered by the Principal Marriage Registrar is illegal and can not serve the required purposes," she said.
However, she said the Ministry of the Interior was making arrangements to give couples whose marriage certificates were not issued in accordance with the Marriage Act opportunity to bring them into conformity.
Ehuriah added that the Ministry of the Interior was moving to "Appropriately inform the Ministry of Foreign Affairs of a legally acceptable (marriage) certificate for the supervision of foreign embassies in Nigeria and Nigerian missions abroad.'
While disclosing that only 314 out of 4,725 locations of worship authorized by the Ministry of the Interior had renewed their licenses, Ehuriah appealed to locations of worship that had not renewed their licenses.
"The implication is that marriages in unlicensed places of worship are not in line with the Marriage Act and can not serve legal purposes when the need occurs; and as such, Unlicensed places of worship operate counter to Section 6(1) of the Marriage Act, "stressed Ehuriah.
The Permanent Secretary also said the Ministry of the Interior had secured the required permission to create Ikoyi Marriage Registry Annex" while agreements are in advanced phases to create marriage registries at Ikeja and Ibadan."
"These, we hope, will solve some of the problems facing the registry to a great extent, "Ehuriah said. 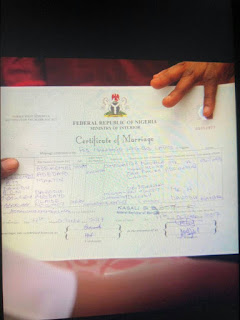