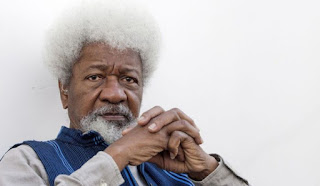 Soyinka lamented the violence suffered by herdsmen, the indiscriminate grassing of cattle and the destruction of farmland.
He therefore suggested that a National Conference be convened, adding that the government led by Muhammadu Buhari can only have an effect by thinking beyond partisan politics.
Soyinka said this while playing host to some learners on his 85th birthday celebration, reports Channels Television.
The playwright said, "This nation's issues are beyond the solution this government can offer, that's the first admission; they have to stop believing in partisan government."
There has always been a big issue with successive governments.
It is simpler at the state stage to say that a specific state is definitely doing better than another state.
But the central government has failed, that's my main point of perspective.
"There is a minimum level that any government elected to power must achieve in order to be considered a true representative of the people."
He called for a national summit to address some of the socio-economic and political challenges facing the country.
Saying that the present difficulties go beyond the powerful government's ability.
Soyinka said more was anticipated from the government in addressing problems that influence the population.
He also called for a domestic meeting to address all these problems for the benefit of all, referring to the safety threats presented by cattle herders.
The Nobel laureate added, "Look at what's happening today with the cattle all over the location, that's a safety problem that should never have reached this level."
That unique act has resulted in hundreds of individuals being murdered, farms being taken over; it has washed away many of the government's beneficial accomplishments.
"They need to face this country as a human habitation where very severe problems like economy, safety, health, even threats of secession come up every day and convoke at the same moment, a domestic conference, what I call an Indaba across all sections that we will all meet and discussion, including this nation's economy."