By Nicerythm.com - July 12, 2019
Roger Federer defeated Rafael Nadal, 7-6 (3), 1-6, 6-3, 6-4 this evening to achieve his 12th Wimbledon final.
He will face Sunday's top seed and defending champion Novak Djokovic in the final.
Federer, 37, has won eight single titles from Wimbledon.
If he wins on Sunday, he will match the open era record of nine for Martina Navratilova.
"I'm exhausted.
Rafa played some incredible shots at the end to stay in the match.
I had spells where I served very well and probably the biggest points in the match went my way.
That first set was huge, to get the lead and try to protect it.
It was a joy to play," Federer told BBC Sport.
Defending champion Djokovic, 32, goes for his 16th Grand Slam triumph after beating Spain's 23rd seed Roberto Bautista Agut in four sets previous Friday. 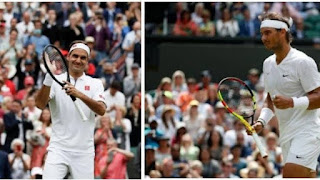 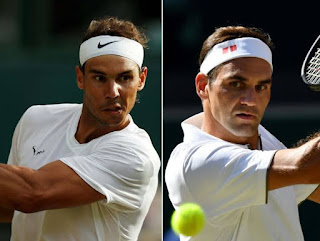