Nigeria: The demonstrators of the police and the Shia protesters 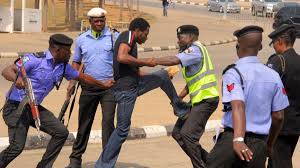 Nigeria: Police and Shia demonstrators confront 2019-07-22 18:08:12 According to the Shia community, at least four individuals were murdered in the capital after conflicts between safety forces and members of the Islamic Movement of Nigeria.
Demonstrators again took to Abuja's roads on Monday requesting the release of their leader Ibrahim el-Zakzaky — in custody since 2015—after reports of their leader and his wife's worsening health circumstances being detained as well.
Mahdi Garba, a member of the Shia party, informed Al Jazeera that Monday's protest began peacefully with followers shouting "Free Zakzaky," but police assaulted their members.
"The complete amount of deaths has yet to be ascertained, but four people have been confirmed dead and many wounded for now," Garba said.
Another eyewitness said police fired live ammunition and tear gas canisters at protesters in an area that houses the parliament building, the executive, and the judiciary.
"Shots were fired as I came out of a house in the main region, packed with civil servants during their lunch break," Fakhuus Hashim, who experienced the conflicts, informed Al Jazeera.
"Everyone began running and more shots were fired.[ Protesters] burned the fire service station next to the foreign ministry," he added.
There was no instant reaction from the Nigerian police.
An analyst proposed the security crackdown on Monday was unlikely to prevent the group from getting to the streets. "Bullets won't stop them until their leader is released.
In fact, more state violence will create radicals and make mediation more difficult," said Al Jazeera, a security analyst with the Abuja-based Goro Initiative, Abdullahi Murtala.
Murtala said the group leader's declining health is fueling resolve and amplifying their frustration.
"Did you see the protesters? Young men and women driven by ideology and willing to die for the cause," he said.
The demonstration is a continuation of a series of demonstrations initiated by Nigeria's Islamic Movement (IMN) that resulted in bloody clashes with Nigerian police.
Several individuals were murdered and more than 40 members of the organization were detained last week after the National Assembly building was closed and gunshots were fired during a demonstration.
Every party blamed the other for the shooting.
The group representing Nigeria's minority Shia Muslims said it will continue to protest until they secure the release of el-Zakzaky, an Islamic scholar who established the IMN in the early 1980s.
Garba Shehu, a presidential spokesperson, lately said in a series of tweets that President Muhammadu "will not ask the judiciary countries to leave due process and set a suspect free."
Shehu accused the protestors of "publicly insulting the president and other officials."
Successive military governments imprisoned El-Zakzaky.
A number of court orders ordering the present government to release the couple have gone unheeded.
A presidential spokesperson informed the media that the IMN leader was being held in custody "for his own safety."
The Shia Muslim group has had frequent run-ins with safety forces in Nigeria for more than three decades while demonstrating against perceived religious persecution.
Approximately 400 members of the group have been murdered by police in reaction to mainly peaceful demonstrations since 2015, according to human rights organizations.
News Nigeria
Reactions: