India is preparing for the first moon landing 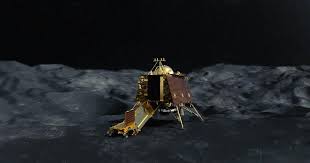 India is preparing to land a rover near the unexplored southern pole.
India's Space Research Organization plans on Monday to launch a spacecraft using home-grown technology.
The spacecraft is anticipated to land on the moon on September 6 or 7.
This is a few steps forward in terms of having a lander with more advanced payload. "This is a few steps forward (from India's past moon mission) in terms of getting a lander with more sophisticated payloads, and also having an orbiter with sophisticated payloads and then a lander that would softly land on the moon, plus a rover that would move around and do comprehensive (inaudible) research," said space specialist Dr. N. Rathnasree.
The Chandrayaan-2 mission will analyze minerals, map the surface of the moon, and search for water.
Pallava Bagla, a science writer with the New Delhi Television Channel, considers this in India's solid space program as a stepping stone. "India is already a tremendous power in space technology. Having end-to-end capacities of creating satellites, making missiles, launching them with a program to launch astronauts into space, coming up by 2022.
Having visited Mars, visited the moon.
And serving the 1.3 billion Indian population through space technology."
This will be the first rover to look for water on the south pole.
"It (the southern pole of the moon) has those permanently shaded crater locations where the possibility of a substantial presence of water, as you know, maybe water carrying minerals, maybe sub-surface water ice, all of these– for which we have had different glimpses from the orbiter missions in the last few years.
So, a little more thorough study of especially those areas where these permanently shadowed areas are there. So, that's why you're going.
It has become the place to go right now, these days," said Dr. N. Rathnasree.
The Chandrayaan-2 mission costs India some $141 million.
With widespread poverty and one of the highest rates of child mortality in the world, some have questioned the expense in a country of 1.3 billion people.
But India intends to send people into space by 2022, thus becoming the only fourth country to do so.