How to prevent future elections in Nigeria– Atiku Tells Buhari 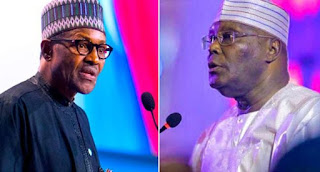 He said the instant application of the Justice Mohammed Lawal Uwais-led National Electoral Reform Committee's recommendation would prevent the rigging of the country's future elections.
Atiku also called for the development of the Electoral Crimes Commission as a manner of avoiding rigging in a declaration he personally signed and made accessible to reporters.
The former vice president insisted that the 2019 elections ' credibility level fell below that of 2015.
According to Atiku; "One way to address the lapses is to implement the National Electoral Reform Committee's outstanding recommendations, NERC, headed by former Federal Chief Justice, Justice Mohammed Lawal Uwais.
The second is the establishment of the Electoral Crimes Commission."
One of these recommendations, which will enhance the independence of the so-called Independent National Electoral Commission, INEC, is the recommendation that the power to appoint the INEC Chairman and Board be removed from the President and given to the judiciary.
Advocating free and credible elections, Atiku said: "Not only does our electoral system need to be updated by accepting the amendments to the Electoral Act passed by the eight National Assembly, but we also need to be up to tomorrow by taking steps today to ensure that the lapses that made it possible for the 2019 elections to be manipulated or rigged to be addressed."
The judiciary is the least affected by the by-elections of all three arms of government, meaning that it has the highest objectivity in matters relating to the INEC.
It is therefore in the best position of the three arms to appoint an impartial chairman and board member for the electoral body, Competent, patriotic.
"This suggestion may seem like a small change, but my life experience has taught me never to underestimate the large difference that small changes can create."
Nigeria faces many challenges today, the chief of which is security and economic revival.
To address these problems effectively, a government must have an honest and unquestionable mandate.
"Where you have an administration whose mandate is considered tainted, such a government will lack sufficient moral authority to deal with the myriad of problems that this great nation is currently facing."
Atiku buhari election News Nigeria Politics
Reactions: