Buhari And The Controversy of Ruga By Clarius Ugwuoha-Politics-

By Mr Julius - July 27, 2019
By Clarius Ugwuoha
RIGHTLY or unfairly, the PMB government recently seemed entangled with Myetti Allah and herdsmen as their welfare appears to be at the top of the government's agenda.
Nigerians were used to herdsmen grazing their cattle peacefully along multiple grass paths. Unknown was the phenomenon of gun-toting herders threatening farmers, kidnapping and murdering and raping females.
It is not certain what led to this scary transformation.
As their atrocities escalated, there were widespread speculations that these were foreign mercenaries masquerading as herdsmen, considering the credence of public sources.
They were from neighboring nations and not the regular herdsmen we were used to, It's been claimed.
The whole nation, however, woke up to the Ruga controversy.
A government that once rejected the militant herdsmen as aliens from Niger, Mali, and others, suddenly came up with the' brilliant' concept of resettling them in all federation nations– a way to end the conflicts between herders-farmers! This unplausible proposition was to be fully financed with the cash of the taxpayers.
Cattle rearing suddenly became a national business with no known country income. The unprecedented hoopla that attended this anomalous proposition made the government suspend the program, while some northern states like Kano took on the task of resettling their' kinsmen.'
Nigeria's unity has never been so seriously endangered.
Nigeria is annexed by an occupying military created intractable by public apathy.
Visits from potentates and letters from OBJ to drum back to the Buhari government did not need a cataclysm if the raging herdsmen are not reined in momentarily.
If sustained, Nigeria can not withstand the pockets of armed insurrections.
Everywhere there are murders.
Katsina and Borno are in Zamfara. Killings in the countries of Edo, Ogun and Enugu.
Murders in the Middle Belt and other sections of the nation.
In the midst of this chaos and carnage is the Rural Grazing system, which only fuelled accusations of a Fulanisation agenda.
Rather than ebbing, It only kept up the tempo of the already excited polity.
RUGA is a nation balkanization recipe if not completely abrogated or redefined for the key north.
It is not the answer to the threat of armed herdsmen.
They work with impunity and a sense of invincibility that the nonchalance of the government indicates complicity.
Before resettling them in the heart north or anywhere, we must first verify their citizenship, disarm and take them to orderly civil behaviour.
There is no reason to resettle non-Nigerians even in Kano or anywhere.
Non-documented immigrants should not extend our resources.
It's untenable.
It's not permitted to occur anywhere in the globe.
Where nationality is not Nigerian or demonstrated, these hoodlums should be expelled by Nigerian armed forces tool. In the key north, the indigenous herdsmen should adopt ranching.
I emphasize the heart North because every other portion of the nation is sensitized and hostile to herdsmen owing to the operations of the bad eggs among them and, of course, owing to the fears of Fulani's expansionist agenda. Any governor outside Ruga's key North drumming is insincere, political, and has no support back home.
Politically, Ruga should be rested.
It came at the incorrect moment, it's like a stifling mask for someone already gasping for breath.
The government is not assisting the sub-ethnic Fulani country in their ill-advised altercation with nearly all ethnic groups in Nigeria by direct or indirect complicity. That one of them is in power today does not make them owners of Nigeria.
They once lived peacefully in the north with the Hausas.
Reports alleged bloody confrontations in multiple countries. The Fulani nation's present spotlight is due, of course, to two problems: the actions of bad eggs among them, and the full silence of their elite fueling collusion concerns, does not speak favorably of sagacity.
It is obviously counterproductive.
The PMB government has vowed to safeguard Nigeria and Nigerians.
It would be inappropriate to continue watching the nation burn without adequate deterrents.
It is necessary to outlaw all gun-toting militias and prosecute all troublemakers irrespective of their roots, so that Nigerians do not resort to self-help with the accompanying cataclysm.
A stitch saves nine in time. 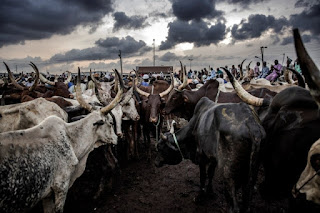