AFCON: Dangote, Otedola to Super Eagles: for every Scored objective you'll get $75k

By Nicerythm.com - July 11, 2019
Aliko Dangote and Nigerian billionaires Femi Otedola pledged the Super Eagles $75,000 for each objective scored in their remaining matches at the continuing Africa Cup of Nations.
Dangote promised $50,000 per objective, while Otedola pledged $25,000 for each objective scored by the Eagles.
Earlier in the 2019 AFCON group phase, Aiteo group, one of the senior men's national team's formal sponsors gave the Eagles $75,000 for the three objectives scored in their 3-2 win over Cameroon in the 16 round.
Hosea Wells Okunbo, a businessman, also promised $20,000 per player, while Lagos state governor Babajide Sanwo-Olu rewarded the team with $5,000 per player.
Gernot Rohr's boys defeated South Africa's Bafana Bafana 2-1 to qualify for the semifinals at Cairo International Stadium on Wednesday night.
In the semi-final match, the Super Eagles will bring on the winner between Algeria and Cote D'Ivoire.
Femi Otedola recently donated $50,000 to Christian Chukwu, a former Super Eagles coach in need of medical care. 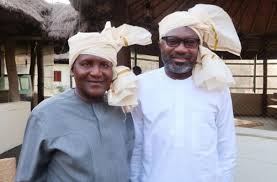